Out of all the animals in the animal kingdom, there are very few that fascinate me as much as the leopard. Their secretive nature, elusive behaviour and tremendous adaptability has resulted in many gaps in scientific literature. They have the uncanny ability to continually surprise the observer.
Here at MalaMala Game Reserve we are blessed with numerous leopards that we are able to view at close quarters.

In November 2017, the Emsagweni female (above) gave birth to three cubs, two males and a female. She used Pat’s Drift Koppies as her den site for the first six weeks of their existence. This rocky outcrop was the perfect hiding spot for the youngsters while they continued their development. Leopard cubs are born with their eyes closed and are relatively less developed at birth than many of the prey species upon which they feed. Leopards have a relatively short gestation period (+/- 100 days) so that the extra weight does not hinder the female when hunting. 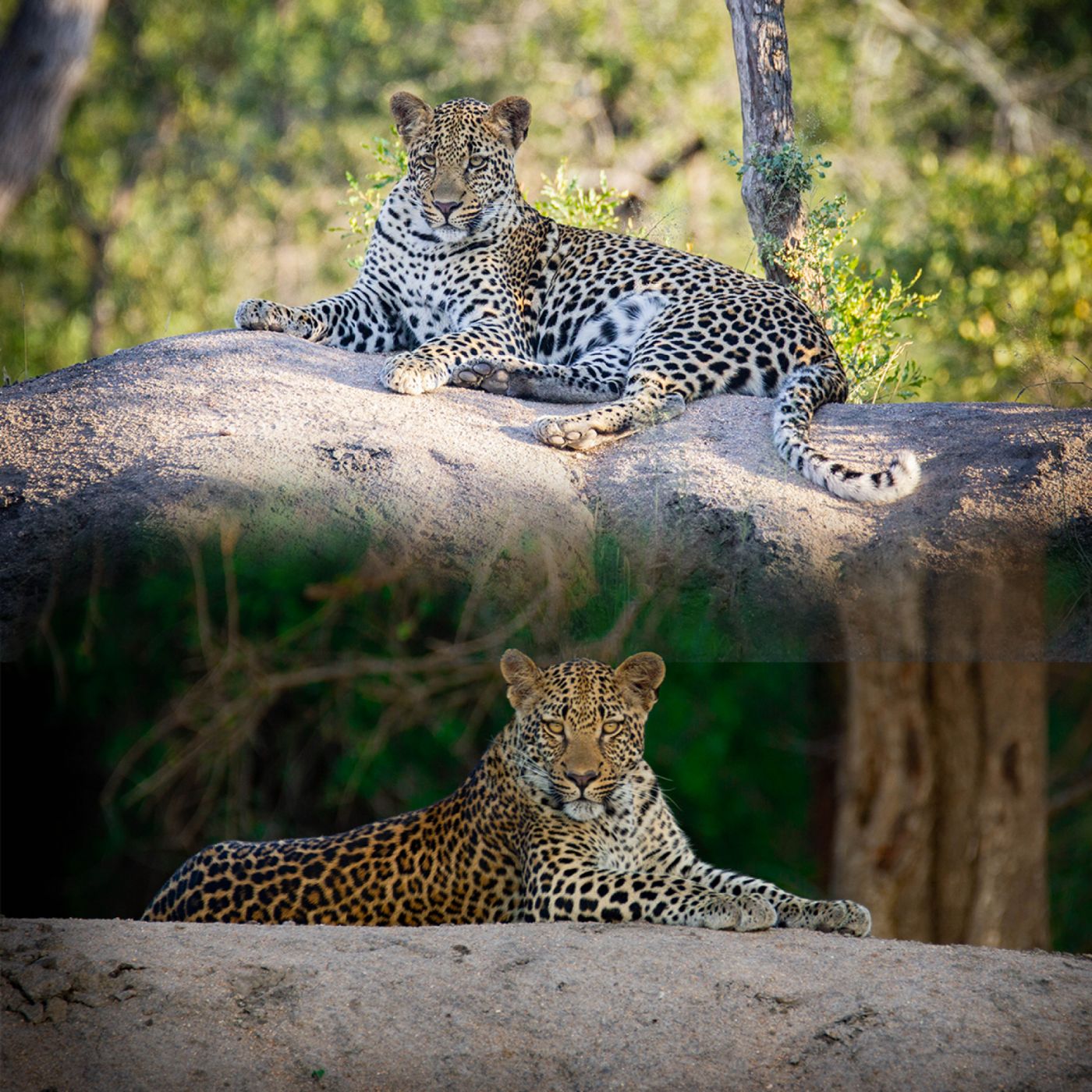 Recent images of the cubs of the Emsagweni female - Photo by Ranger, Jaco Joubert

A litter of three cubs is relatively unusual and it meant that the Emsagweni female had her work cut out in order to feed herself as well as her three growing cubs - which were weaned at about three months of age. Male cubs tend to have a higher mortality rate than females because they explore and wonder off from their den site more often than the less adventurous females do. This makes them more vulnerable to other predators, which would kill them if found. Male cubs also need to be fed more than females do. So, for the next six to eight months, the Emsagweni female would hunt, kill, fetch her cubs to come and feed on the carcass, and then hunt again. She did this excellently despite having lost sight in her right eye a few years prior to their birth.

At the age of seven months the female cub was killed, but to this day the other two male cubs survive. They are currently 18 months old and are as healthy and beautiful as ever. These boys spend most of their time around one of two waterholes: Buffalo Bush Dam and Paddy’s Pools, rewarding rangers and guests with regular sightings. Occasionally the whole family is seen together, which is a remarkable sight.

The cubs have now outgrown their mother and are of an age where they are able to hunt for themselves – albeit rather clumsily. Although they are still resident in their mother’s territory, their days are numbered. The day will come (anytime within the next six months) where mom will kick them out of her territory. This will probably happen when the Emsagweni female has her next oestrus cycle. The dominant male in the area will seek her out and mate with her. This will be a dangerous time for the cubs as the incumbent male leopard (the Accipiter male – who is also their father) will not tolerate their presence for long. 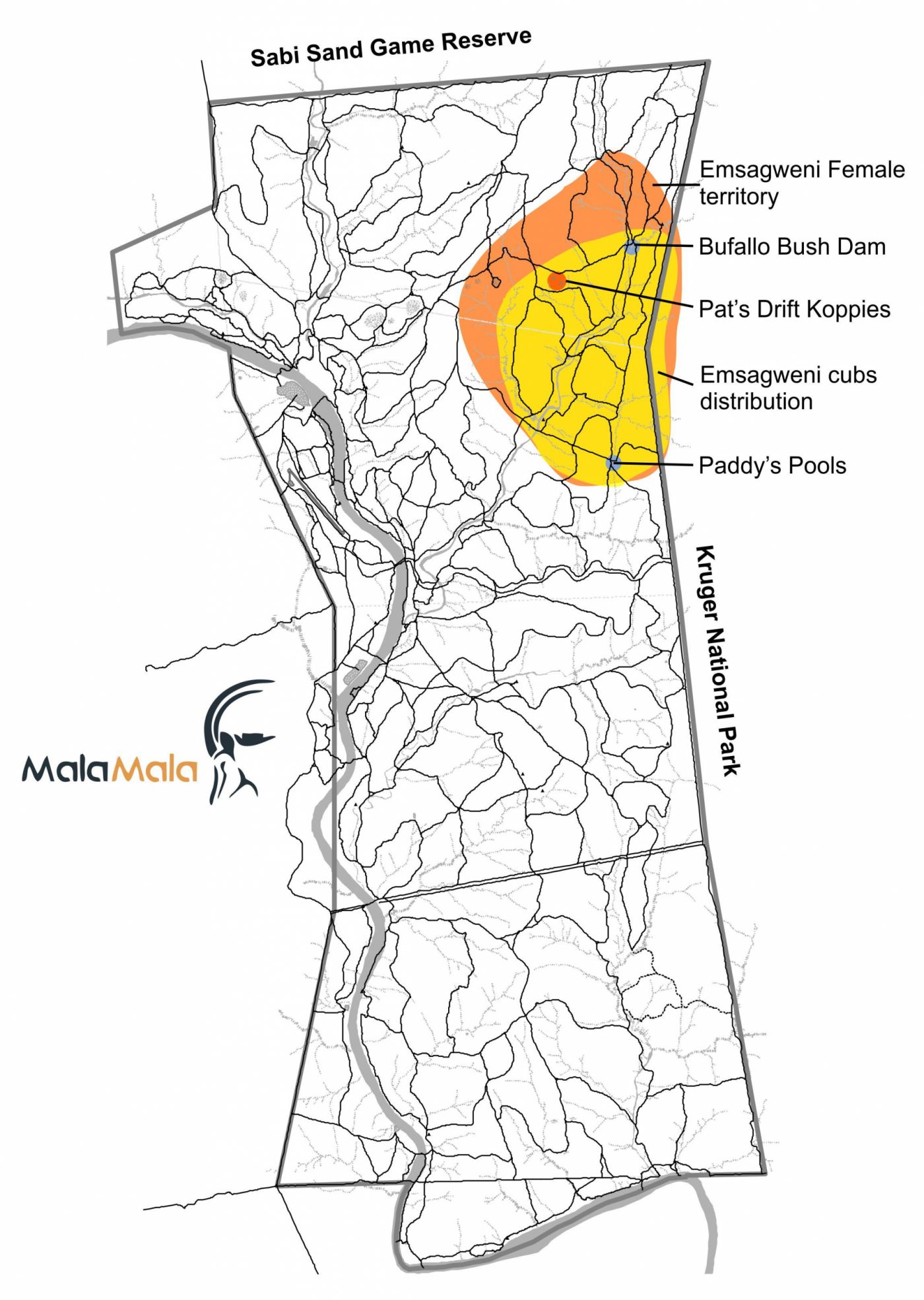 They will have to become nomadic, ducking and diving to avoid all other predators, including other dominant male leopards, if they are to survive. Even though they are powerful cats and have the acrobatic ability to climb trees, they are ranked only 4th in the African predator hierarchy. Lions, hyenas and Cape hunting dogs all able to dominate and even kill leopards as they compete with each other for resources. Only the street smart will survive. If they make it to maturity they’ll be able to challenge dominant territorial males. If successful, they will evict their opponents and claim the kingdom as well as the females in it.

Their lives as nomads will probably be a mystery to us. We can speculate that they will move either east into Kruger National Park, or north, into Sabi Sand Game Reserve, away from major water bodies that are prime territories to the biggest and strongest predators. Perhaps their best bet for now is to remain within their father’s territory, in the north eastern parts of MalaMala, with the hope that he’ll be patient with them. Only time will tell but we all hope that they make it and end up back on MalaMala to stake a claim for themselves. For now, they continue to grace us with high quality viewing. Long may it last.