Interactions between species make for some of the most thrilling game viewing. Perhaps this is why the age-old feud of predator vs prey is such a sought-after sighting. When prey species ingeniously evade predation, one is left marvelling at the distinctive adaptions to each animal that make survival possible.

A granite outcrop bends the Mlowathi River. The rocky section has a gentle gradient to the east of the riverbed. The boulders on the western bank are large and steep. Stark and with a white-washed aesthetic, this boulder system is uninhabitable for most species, not so for the family of klipspringers who call it home. Klipspringers are a uniquely adapted species of dwarf antelope whose foot structure is not dissimilar to that of a ballerina's pointe shoe.

In an area where the predator density is as high as it is at MalaMala, it is only a matter of time before an opportunistic carnivore tries its luck at hunting the very adept klipspringer. On the 21st of February, we were fortunate enough to witness one such interaction.

Rangers found a pack of 21 Cape hunting dogs who lay resting in the shade of a white berry bush thicket at the confluence of the Sand and Mlowathi Rivers. For the first hour of the game drive, the Cape hunting dogs moved only to escape the summer sun's heat.

For most predators, dusk marks the time to move, the sun dips in the sky, and the temperatures become tolerable. True to form, as the evening mellowed, the more eager individuals began motivating those that rested by nibbling at their necks and filling the air with excited squeaks and twitters.

The pale sand of the dry riverbed took on a golden hue of the setting sun as the Cape hunting dogs loped up the Mlowathi River. Dark jackalberry trees lined the banks and appeared to frame the pack as they sought to flush any unsuspecting prey species. This afternoon, the family of klipspringers had the grave misfortune of being chanced upon by the Cape hunting dogs.

Cape hunting dogs, unlike ambush predators, use speed, agility and cooperative hunting strategies. Pandemonium broke loose as the canids gave chase to the family of three. We watched with bated breath, expecting the pack to catch and eviscerate at least one of the klipspringers. Instead, to our surprise, the klipspringers acted in haste and wisdom, scrambling to a ledge on a large north-facing boulder that was no thicker than the girth of a man's thumb. The klipspringers, informed by instinct and previous experience (they endured something similar in 2019), knew that this would be their best place of refuge against the relentless pursuits of the pack. 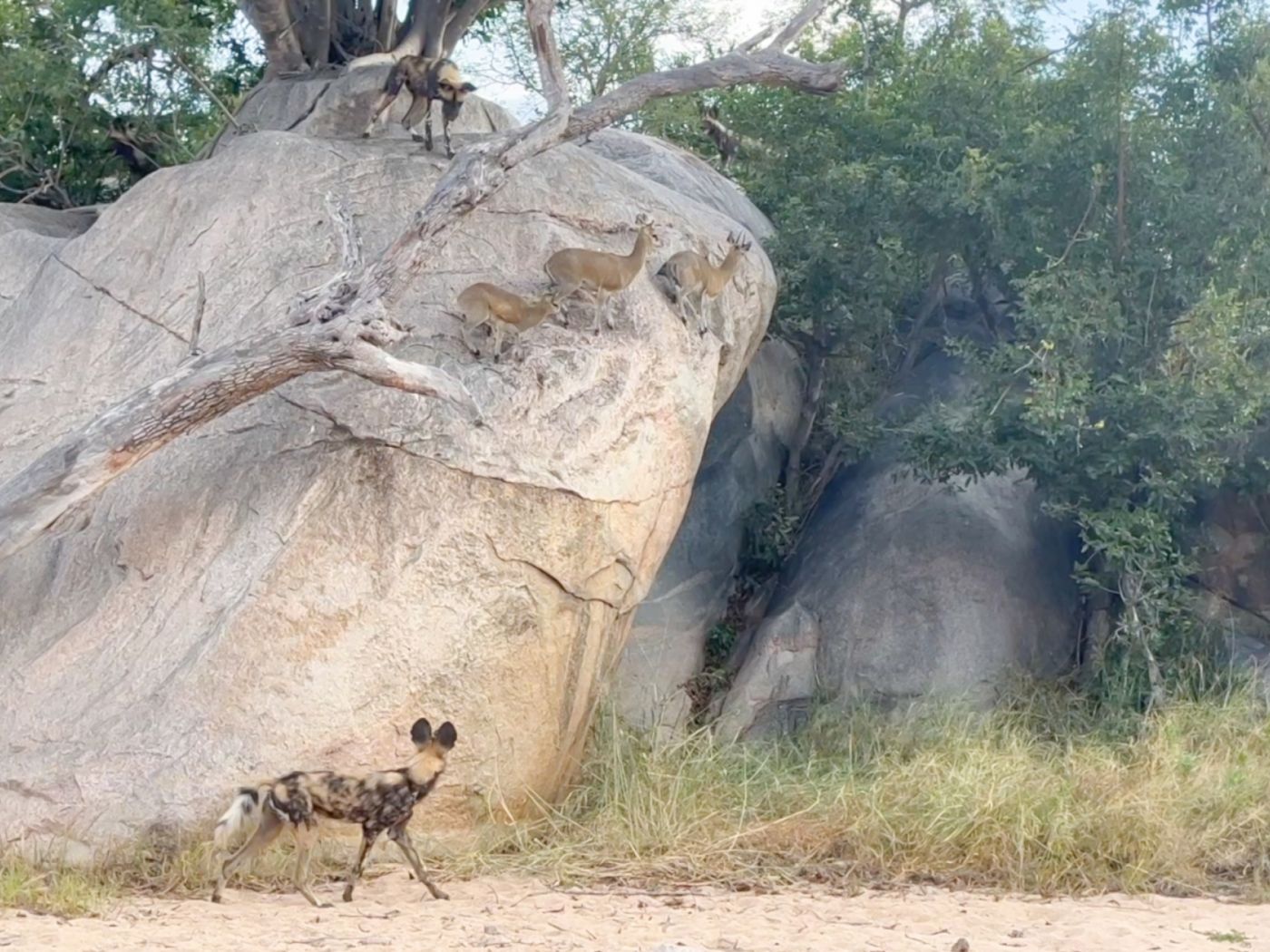 Almost as though the Cape hunting dogs knew their best option was to unnerve their prey, various individuals implemented various strategies. While most of the pack bounced around the boulder, one scaled a dead tree that rested against the rockface. Another crawled from the top, carefully negotiating the sheer drop that would result in an injury if it lost its footing. Then they would switch, the dogs at the base would race around, and the dogs at the top would try their hand at the jumping strategy. With gnashing jaws, the pack had encircled the boulder that buffered the klipspringers, but the antelope had selected the perfect perch; no angle left them exposed.

For what felt like an eternity, but in reality was only about 15 minutes; we watched as the Cape hunting dogs tried to surmount the steep slope that protected the klipspringers from what would be a gruesome demise. 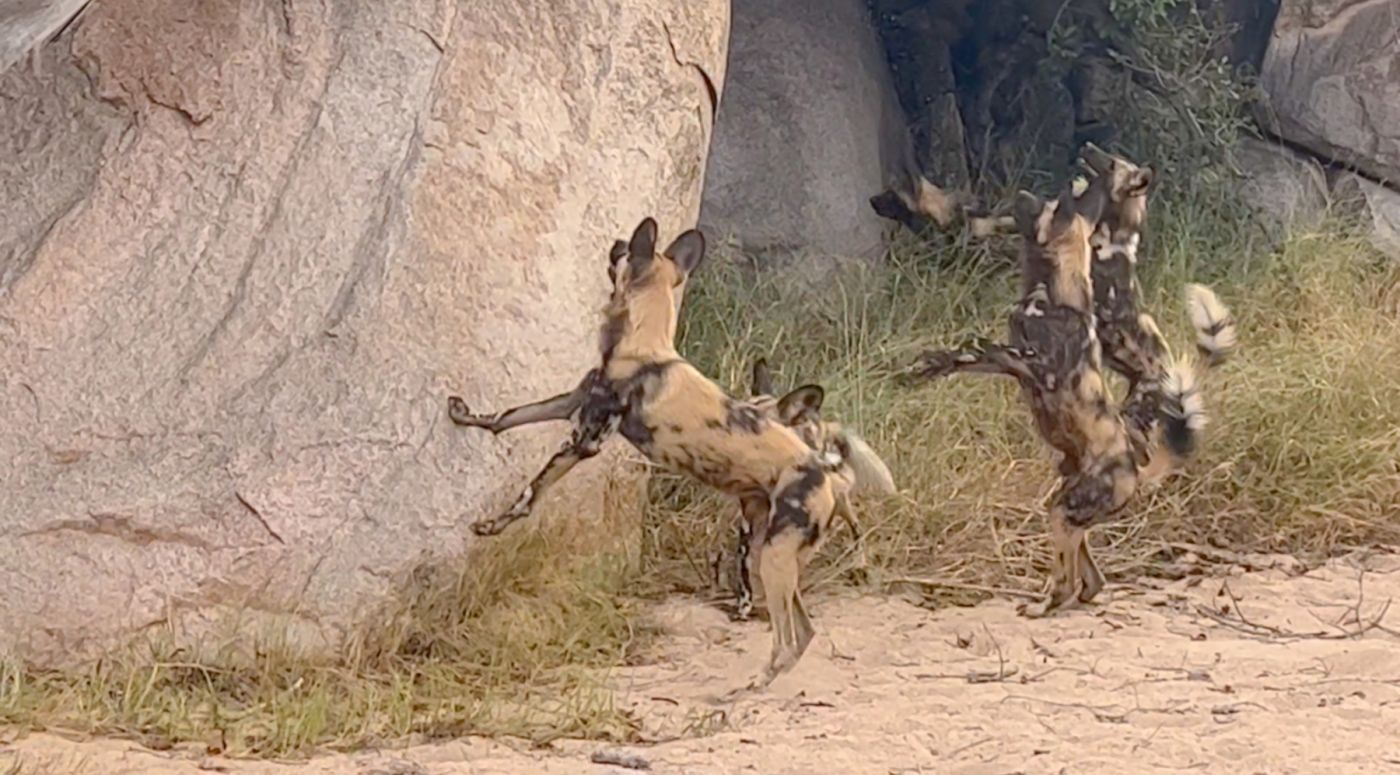 Eventually, realising the futility of the exercise, the Cape hunting dogs admitted defeat and raced off in pursuit of an impala, who was not as well protected against the wiles of the pack.

My guests and I returned to 'the boulder of refuge' the following day. Curiosity got the better of us, and we took on the challenge of scaling the rock to see how the klipspringers had successfully evaded the hungry dogs. Examining the flat surface that the klipspringers had clung to and the speed at which the Cape hunting dogs had summited and descended the boulder gave us new respect for both species. The boulder was also notably more immense than we realised, and with our new perspective, it became clear that the dogs were jumping more than two and a half metres (maybe three).

Wits, intelligence, speed and strength all play a role in "eat or be eaten", but there is no doubt that a certain amount of BMT (big match temperament) goes a long way to ensure survival.